AJR is a band of brothers, so, naturally, an AJR concert feels like a family reunion. When Adam, Jack, and Ryan Met took the stage at the Deltaplex on October 20, bubbling anticipation exploded into cheers of joy. The crowd knew every word despite this being the Met brothers’ Grand Rapids debut.

Nailing down the genre and message of AJR’s repertoire is a difficult task. With an electronic-pop foundation and symphonic influences, AJR creates a full-bodied musical experience. They’re not quite as political as many current mainstream artists (sans “Birthday Party”), but they don’t shy away from sensitive topics either.

Traditionally, concert-goers view live shows as a form of escapism – something that allows them to run from the chaos of this world for just a moment. Yes, AJR plays to entertain, amuse, and simply make people happy, but an AJR concert is not merely about ignoring our problems: in the words of Jack Met, it’s about “being our shameless selves for ninety minutes.”

For ninety minutes, Grand Rapids was not just listening to live music; the venue, practically a warehouse with a stage, became the backdrop of a multi-media art show. With one of the most entertaining shows of 2019, AJR and their talented band kept the surprises coming. Trumpeter JJ Kirkpatrick (AKA, Jimmie Lee Jr.) blew us all away, bringing the show to a whole new level of technique and expertise. The interactive visuals and lights stunned, perfectly meshing with the personality of the brothers and the vibe of each song. The crowd watched in rapt amazement as Jack fought a deluge with an umbrella and performed a rhythmic handshake with himself. 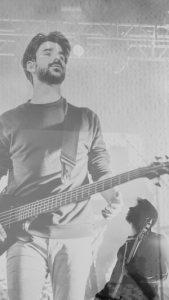 Not only did AJR entertain their fans, but they educated us. We heard the backstory on “Karma” – the bop that AJR calls “a happy panic attack.” We even watched a snippet of the production process behind “Don’t Throw Out My Legos.” I will never view my car keys the same way again.

Leaving an AJR concert is a bittersweet feeling – you feel completely satisfied, but wish you could stay just a little bit longer. During that hour and a half, strangers empathize, celebrate, and laugh in unison.

AJR creates a space for all of us who aren’t quite sure where to go from here: the Met brothers provide the perfect musical backdrop for everyone in an in-between stage; whether you’re moving out of your parents’ house, struggling through your master’s degree, or your grandpa just passed away, AJR is right there with you.

If you’re feeling a little lonely or a little confused with nowhere to go, show up to an AJR show—it’s the emotional equivalent of leaving your legos at home just in case. 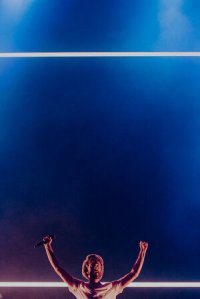