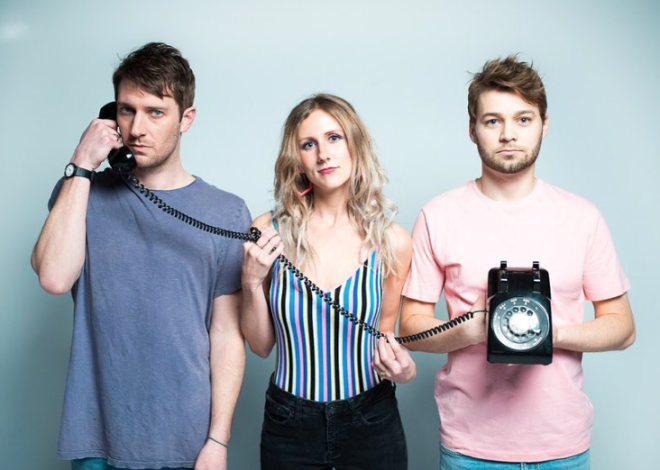 As a music junkie who grew up in Grand Rapids, MI, I love finding up-and-coming artists in the area. That’s why I jumped at the opportunity to chat with Boy From School about their new album White Hot Light (released August 17). They’re a Grand Rapids-based band with an alt-pop sound we already know and love.

Boy From School consists of co-lead vocalists Alex Mason and Erin Dickson—who brings an unexpected edge to the dynamic with her additional talents in synths and flute—alongside bassist and sound engineer Beniah Dickson.

According to Mason, who also provides for the band’s guitar-needs, “I started the band back in the middle of 2014 with my brother-in-law, and one of my good friends. And it was mostly just my songs. Then, we put out this little demo just so we could start getting shows and stuff and Beniah recorded a lot of our album. He joined the band when my brother-in-law moved to Seattle and we needed a bass player. He’s married to Erin, so he joined us and then about a year later, I want to say, Erin came on too. And so yeah, that’s kind of how the band formed.”

With their HAIM-meets-the-80s sound, they’ve been compared to groups and artists like Talking Heads, Genesis, and even Cindy Lauper. Erin Dickson says what separates them from the rest of the indie and pop scenes is their lack of a genre.

“We honestly don’t even know what to call ourselves—if it’s like pop or if it’s rock,” she said. “It’s very song-by-song. I feel like it’s just kind of [influenced by] this blend of the instruments we use. It’s equally guitar-driven and synth-driven. Then also, just having two lead vocals. I feel like that’s another thing that’s not as common—having both female and male vocals.”

Mason was quick to point out that Erin Dickson’s flute really sets them apart from other bands as well, adding, “I think we do a good job of straddling, like, dance-y types of music and slightly more complex, less dance-y music, I guess. I always want people to be able to listen to [my music] in a number of different settings.”

One of those settings was at The Pyramid Scheme, a bar in downtown Grand Rapids. On August 17, Boy From School played a show to celebrate the release of their new record. The album consists of some old songs, written by Mason back in 2014, and some newer songs written by Erin Dickson.

The title track is a bop, for sure. When asked why they chose that track to represent the album, Mason first responded with a simple, “We liked it a lot.”

He went on to say, “It covers a lot of the themes that we talked about in the album—like, a little bit of melancholy, like, worry and anxiety mixed with a little bit of hope. And it starts off the album out kind of nicely. The song, even though it’s kind of dance-y, it’s a little melancholy. I think the album eventually kind of ends up being a lot more positive.

“I think in the end with ‘White Hot Light,’” he continued, “we all just kind of agreed that would be a sweet album name. There’s a lot of nice imagery and connotations with it.”

Although Grand Rapids isn’t the first city that comes to mind when you think of notable live music, the pair said they have found immense support in the release of this new album. As they grow, they’ve tried to find a balance of playing the right amount of shows in the right places to get their name and sound out there, calling The Pyramid Scheme “home base.” The city is full of venues, and some are more than willing to take a chance on new bands.

“The other bands around here, themselves, are really supportive of each other,” said Erin Dickson. “We share other people’s songs, they share our songs. It’s not really like a competitive deal.”

They gave a shout out to their “band besties” Secret Forte as well as Conrad Shock, crediting them with some great music and incredible moral support.

As they go from here, Boy From School is excited to see how White Hot Light is received. They’re looking forward to diving back into the creative process, writing new music and creating songs from scratch. Alex even hinted at a potential B-Side!

Keep your eye out for new music from Boy From School by following them on Instagram (@boyfromschoolband) and stream White Hot Light on Spotify or Apple Music. If you find yourself at a live show, pick up a physical copy of the album. And if you’re feeling really generous, bring the duo some french fries with mustard or anything spicy to dip them in.